A downloadable asset pack for Windows

I put this scene together for the 2018 Search For A Star environment art contest.

When I got the brief I knew that I would have to make something quite small so that I'd be able to polish it to a reasonably high standard in the four weeks or so I had left. My initial Ideas were...

. An officer's dugout in the trenches of the First World War.

Both these ideas were small enough that I could do them justice within the time limit, but I felt more confident with the motel though so that's what I went with. However, I went off the idea of a crime scene because it felt too cliche; so I changed it to something more festive as Christmas had just been and gone.

Imagine a family of three driving across the USA to spend Christmas with relatives, only to have their car break down somewhere along the way. The two parents are now stuck with their six year old child in a cheap, one bed motel room on Christmas Eve with no way to get the car fixed any time soon. To avoid a meltdown they have to make do for a celebration with what they can find in the local town and whatever they had in the car.

Considering it only took me about three weeks to get this done whilst also keeping up with my uni assignments, I’m really happy with how it turned out.
It looks more or less like what I imagined when I first started researching and I think it captures the essence of Gregory Crewdson’s photography.

I think my texture work was quite successful, particularly my Substance Designer work, although I improved a fair bit in Painter also. Modelling wise I could have been a bit more adventurous, I wanted to do a small fake Christmas tree which would have been a challenge but I ran out of time. I did progress in Marvellous Designer however, and I enjoyed spending as much time as I did on the Television, it reminded me that I need to work more on my ability to polish individual assets rather than environments as a whole.

That’s not to say there’s nothing I wouldn’t change however. I like how it looks but there are some glaring issues with optimisation that I’d like to fix. Lot’s of wasted UV space to account for texel density and bespoke textures used where tiling ones probably would have been better suited. However it’s a small scene so it’s not the end of the world.

All in all I had fun, learned a lot and gained a portfolio piece, so can’t complain.

can anyone tell me how to get on the game and play .

It's not a game. It is his artwork. I wanted to play this also. 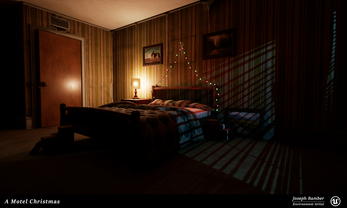 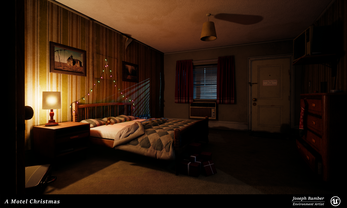 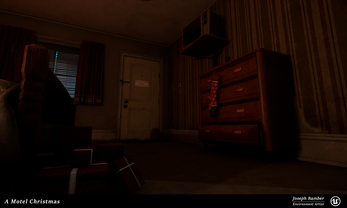 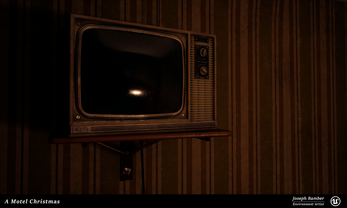 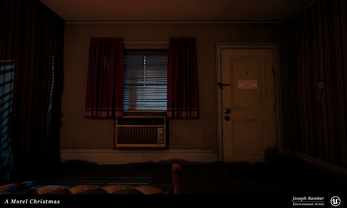